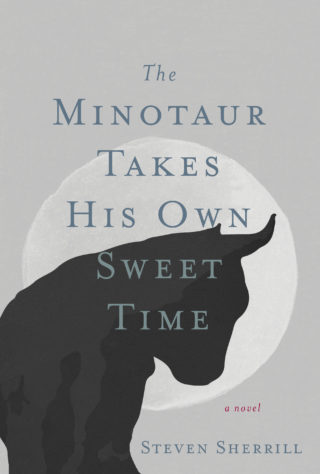 In 2011, Neil Gaiman selected this work of contemporary Americana as one of five books for his initial line of audiobooks for Audible.com’s “Neil Gaiman Presents.” The novel also made The Wall Street Journal’s list of the “Five Best Novels Not About Humans” and The Telegraph’s list of the “10 Best Food and Drink Books of All Time.” This fall, Steven Sherrill is bringing M back for a sequel.

In The Minotaur Takes His Own Sweet Time, the Minotaur has moved north, from a life of kitchens and trailer parks to that of Civil War re-enactors at a run-down livinghistory village in the Rust Belt of central Pennsylvania. Though he dies now, in uniform, on a regular basis, his daily struggles remain unchanged. Isolation. Loneliness. Other-ness.

Cared for by the Guptas, the immigrant family that runs the motel where he lives, and tolerated by his coworkers at Old Scald Village, M wants only to find love and understanding. The serendipitous arrival of Holly and her damaged brother, waylaid on their own journey of loss, stirs hope in the Minotaur. As their paths overlap, readers will find themselves rooting for the old half-man, half-bull as he stumbles toward a real live human relationship.