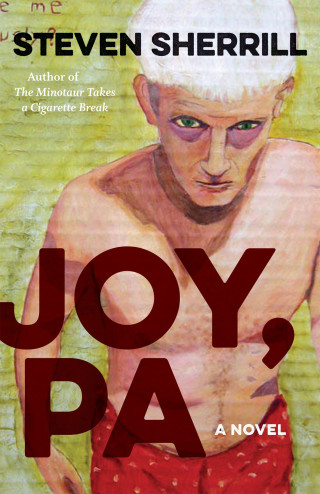 A darkly insightful evocation of the post-industrial era, Joy, PA tells the story of a family teetering on the precipice of ruin. The Augenbaughs live in a broken and decaying town where the last vestiges of country-club wealth run up against the terrible realities of working-class poverty. Abigail, a fervent believer in the apocalyptic teachings of a radio preacher, is desperate to save her son from Judgment Day as she readies herself for the Rapture—due to arrive in just a few days. Her husband, Burns, has moved to the basement to live out his days in a medicated stupor, unable to cope with memories of his service in Iraq. Caught between the suffering of his mother and father, ten-year-old Willie fights the inherited demons that have savaged his parents’ tenuous grasp on reality.

The somber drama surrounding the Augenbaughs plays out with a piercing and commanding lyrical beauty. Both transfixing and disconcerting, Steven Sherrill’s empathetic portrait of alienation elicits hope and sympathy amidst shattered but no-less-dignified lives.

“Steven Sherrill writes like Cormac McCarthy on speed: beautiful short sentences create a breathless suspense, in which I as a reader, although a skeptic, experience the impending Apocalypse. The anticipation of the end drives several protagonists into a frenzy and acts of violence, rendered poetically into a wonderful and terrifying painting, Goya in the blood-rusted Bible Belt.”
—Josip Novakovich, author of Infidelities and April Fool’s Day

“In phantasmagoric, almost delirious prose, Steven Sherrill writes from a distinctly southern perspective, from a landscape that is rendered credulous and incredulous at once, as parody and earnest rendering, a psychic road map of contemporary dystopic America. Happily, there’s still a place for skewed prophetic voices the likes of Sherrill in American letters. A singular voice; there’s no one else like him on the literary landscape.”
—Robin Hemley, author of Reply All